For the first time, Pattie Boyd speaks about her relationships with George Harrison (he wrote “Something” for her) and Eric Clapton (he wrote “Layla” for her).

As Eric walked through the door George handed him a guitar and amp â€“ as an 18th Century gentleman might have handed his rival a sword â€“ and for two hours, without a word, they dueled. The air was electric and the music exciting.

At the end, nothing was said but the general feeling was that Eric had won. He hadn’t allowed himself to get riled or to go in for instrumental gymnastics as George had. Even when he was drunk, his guitar-playing was unbeatable.

Perfect for fans of decision trees, curious about religion, or just don’t like Geddy (it’s one of three instrumentals from the new album):

How are your memories of ’80s lyrics? Try for yourself (warning, I am a music geek and this puppy was tough) 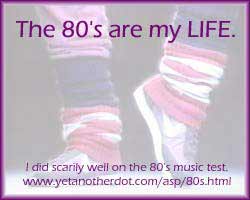 Friday night we didn’t do much, I heated up some frozen Asian food, Jill went to bed early, and I surfed and read newspapers.

Saturday we got up late and lazed around, getting to my company picnic later than planned, but still had fun and ate a lot (good ribs) in spite of the oppressive heat. We came home, read, watched TV, had pizza for dinner, didn’t do much. We went to see emmet swimming at Ned Devine’s that night, unfortunately the opening band, the BANZAI Underground, was horrible and ran long (really guys, if you play your last song, then say you have time for one more and no one cheers, that should tell you something, eh?). We’d brought both cars because Jill figured she’d want to go home early and did – they played ’til 1:30, and I stayed to hear all of it. Glad I did, as they premiered a new song, “Just Call A Cab”, which had a catchy chorus. Todd let the crowd choose the last two songs of the second set as they were running out of time (other choices were “Hey Jesse” and “Listen To The River”).

Today was a little cooler, so we’d scheduled stuff to do. We got all the camping/trip stuff put away, and aired out the stuff that’d been put away wet. I was finally up to cooking and made a rÃ©moulade sauce for shrimp and roasted some zucchini to go with it. Jill finally finished the last Harry Potter and got her school work done, so now we’re going to watch some Family Guy.

I was thinking of going to the Virgin Festival this weekend, but since I’ve seen shows recently from the Saturday and Sunday headliners, the desire isn’t as sharp (when it comes down to it I’m a reserved seating fan, and there’s no way I’d be as close as I was for those shows), and I think I’m a little festival-ed out at the moment (I do want to see Fountains Of Wayne again at some point). The bonus is I’m able to go to a last minute show in Herndon by emmet swimming today, so that’s cool. There are a number of interesting possiblities for tomorrow, but I may just stay home – we still haven’t unpacked, and the shows on the DVR aren’t going to watch themselves.

I made it there in 1986 – my mom and sister went to France that summer, and my Dad and I said we’d get to go somewhere in return, so we chose San Diego, and he dropped me off in the mornings, caught up with friends (he lived out there for a while) and picked me up in the evenings. It was a lot of fun, I finished my X-Men collection, met all kinds of folks (Frank Miller, Stan Lee, Jack Kirby) and when it rolls around each year think about how much I’d like to go back (although if it and FRFF remain on the same schedule that could be a problem). One of the coolest things that happens there now is a lot of comics, TV and film news gets released there, and here are some of the things I’m psyched about:

â€¢Karen Allen will return as Marion Ravenwood in the new Indiana Jones (who needs Short Round).

â€¢Kevin Smith will write and direct an episode of Heroes: Origins, the six-episode spinoff series.

â€¢Harold Perrineau (Michael) will return to Lost in season 4, Libby’s past will be shown, and there’s a new Dharma Initiative short.

â€¢First there was â€œBuffy Season 8â€ in the comics, now there will be an Angel Season 6, called Angel: After the Fall, and written by Brian Lynch.

â€¢Battlestar Galactica:Razor will air on on Sci Fi Nov. 24 (and be on DVD before the fourth season starts) in January, telling the history of the Battlestar Pegasus. You’ll also see the original Cylon Centurions and Raiders.

â€¢Twin Peaks: The Complete Series box set will be out later this year and will include both seasons of the show as well as both versions of the pilot.

We arrived at Dodds Farm right on time at 5PM Wednesday, except they’d let people in early, at 2PM. So we drove to the same area we’d been in last year, and found the first canopy up and some friends there. We parked and unloaded, then set up our tent. We helped to set up two more canopies, and it was starting to get dark. We helped Stuart and his brother Cliff set up their tent, then we drove into town and ordered pizzas for the group at Four Brothers, going to the Stewarts for some ice while they cooked. We got back to camp, got some beers, and devoured the pizza – greasy and perfect. We were wiped after all the work, and went to bed soon after.

This was our fifth year there, and we continued the tradition of the last four years, where we and the Jewells split cooking duties. Stuart’s wife and daughter weren’t there this year due to a conflict, but his brother stepped up. For breakfast they made pancakes and homemade scrapple. We hung out for a while as music from the main stage wouldn’t start until evening, but we discovered Red Molly (one of our favorite finds from last year) was playing in a row of vendors, so some of us went down to see that. We also found that The Strangelings would be playing the Budgiedome around 6, so we went to check that out too. A good warm up for the evening, which got started with the annual steak and martini night courtesy of the Jewells. Later on we went to see Marshall Crenshaw at the main stage, a longtime favorite of Jill’s mom (so Jill knows all his early stuff).

Friday I got up at 7 to do the tarp run at the main stage to save space, then came back to camp and started making scrambled eggs and sausage. We headed over to the main stage at noon to see the start of the Emerging Artist Showcase, since Vienna Teng was playing first (she’s a big name – plays at the Birchmere around here, got a Tori/Vanessa Carlton flavor). I went back and forth between camp and the showcase – I wanted to see artists, but it was damn hot. I made sure to also catch Edie Carey and Five2 – I’d listened to music from all of them the previous week, and had picked my favorites already. Later in the afternoon, they held a Beatles showcase at the workshop stage, with a bunch of interesting performers. I hadn’t seen the Dust Poets before, and they did a nice polka version of “Lucy In The Sky With Diamonds”. Stephen Kellogg & The Sixers had a good acappella beginning to “Blackbird” and a sloppy take on “With A Little Help From My Friends”, while Lucy Kaplansky performed a moving version of “Let It Be”.

I took a quick shower in the afternoon (I usually shower then because the lines are incredibly long in the mornings) before helping batten down the hatches as a storm was approaching. We even had time to make dinner (sauteed onions and peppers on grilled chicken sausages) and eat it before the rain came. The storm wasn’t too bad to us, and we went back to the main stage to see most of Stephen Kellogg & The Sixers (stage was too low for a backflip during “Uninspired Gambling”, though). Jill was psyched for the Friday Night Summer’s Eve Song Swap with Marshall Crenshaw, Lucy Kaplansky and Richard Shindell, but Lucy only got through one song before the rain returned with a vengeance. Luckily it was the new one Jill most wanted to hear, “Manhattan Moon”, as we got too damp to make it through the rain delay and went back to camp to dry out (and wait out the lightning in the car).

Saturday Meg and Cliff did the tarp run, so I slept in until it was time for the first workshop stage, which featured Red Molly so I had to go. They were good, especially on their version of “Darlin’ Corey”. Also good were The Lovell Sisters, who were much younger than I expected. I got a ham, egg and cheese crepe from The Skinny Pancake and brought it back to camp, then saw the rest of Tracy Grammer & Jim Henry and caught some of the Bob Dylan tribute before seeing the Most Wanted Song Swap with Pat Wictor, Red Molly, and Jill’s new fave Ellis. I took a break to cool off before checking out the The Songwriting Process workshop with Dar Williams, John Gorka and Ellis (and Dar played a brand new song).

Late in the afternoon, Stuart and I braved the uncommonly long shower lines for a “two beer shower” – two beer because we each brought one to drink, and could have had another in the time it took to make our way through the lines. We saved our big cooking for Saturday night, making fajitas and guaca-salsa. It took a while (and we barely made it to the stage on time), but it was dang tasty. The big finale was on the main stage that night, with Dar, Eddie From Ohio and Lowen & Navarro. Later we had the annual Saturday night Canexican night, and efo stopped by for a while (they skipped last year due to nasty weather). It was good to see them, but they left and the folks that stayed the longest were Dan Navarro and Annie Wenz, telling funny stories of cousins and naked calendars.

Sunday morning we were up early to tear down and pack up our stuff. We said our goodbyes and left around 8, right when we wanted. However, we took a wrong turn and got to 87 about 30 minutes behind schedule. We were doing ok, but the kennel Illa was staying at closed at 4, and we knew it’d be cutting it close to get there, so we called and told them we’d pick him up on Monday. That was wise, because as we sat outside White Castle getting ready to get back on the road, the skies opened and remained open the rest of the way home. The NJ turnpike was awful and we took 295, then 95 in Delaware was bad and we got on 40 to Baltimore, and of course the Beltway sucked, and we had to get on the BW Parkway and take backroads to Bethesda. We didn’t get home until 7 and we didn’t do much besides unload the car before heading to bed.

A good vacation overall, it was good to see as much family and friends as we did. Lessons learned: we shouldn’t schedule so tightly at the beginning and end, and we need to not travel on 95 on Sunday afternoon. We’ll see how some new strategies work next year, as it will be Falcon Ridge’s 20th anniversary and we wouldn’t miss it even if that means we can only fly into Albany for the weekend.