DIFRwear sells RFID blocking wallets and passport holders. I’m not saying buy one, but I just did.

I went to see Asia last night at the Birchmere. Sadly my arrival luck did not hold, as I got there three songs in, but I didn’t miss any songs I wanted to hear and still got a decent seat. Asia is known for its two big hits, “Only Time Will Tell” and “Heat Of The Moment”, but what most people don’t realize it was the first 80s supergroup (Jill thought they sounded very similar to Cutting Crew). They celebrated that by playing a song from each member’s original band: “Roundabout” (Steve Howe was from Yes), “Fanfare For The Common Man” (Carl Palmer was from Emerson, Lake & Palmer), “In The Court Of The Crimson King” (John Wetton was from King Crimson) and Video Killed The Radio Star (Geoff Downes was in the Buggles, and also Yes). All great performances, and the other songs were good as well (almost all drawn from the first Asia album) – the members are all from progressive rock bands known for their epics, but with the Asia albums boiled the songs down to pop song lengths. The biggest crowd response came for the hits, and the sound was amazingly close to the original versions. The band put on a great show for getting up there in years (Steve Howe looked frail, but he always has), and I’ll be interested in hearing what they produce in the future.

This lovely lady is Zoe Kravitz, the 18 year old daughter of Lenny Kravitz and Lisa Bonet. That’s just not possible, must be quantum physics.

Let’s see what happens if I’m not the only posting pictures of actresses. 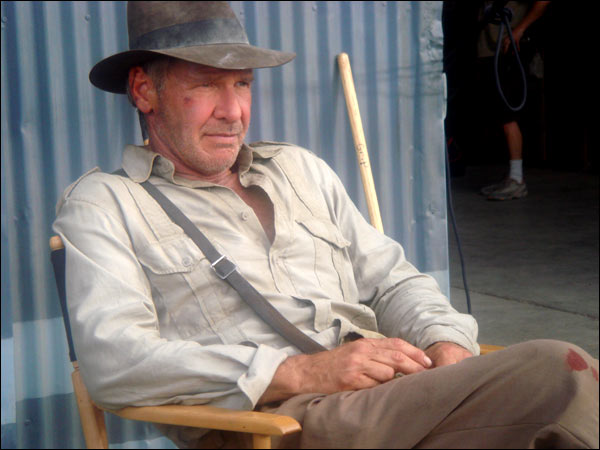 I don’t care how old he is – cue the damn music already.

Oh, and photo taken by Spielberg.

Short films behind the scenes of the new B5 DVD

If those aren’t random enough, how about a Simon & Garfunkel medley performed by Julie Andrews and Mama Cass?

Friday I headed downtown to meet the rest of my family at RFK to see the Nationals take on the Indians, and to celebrate (belatedly) my mom’s birthday and Father’s Day. It’s tough for us all to get together during summertime (the next time won’t be ’til August), but the game was fun. From the Post’s take, you wouldn’t know about the coolest thing: a catch by the shortstop that wasn’t ruled a catch, since the ball went in his shirt and down his pants. We had some food (Jill and I had platters from Red Hot and Blue) and beers (Harp was $6.50).

Saturday I didn’t do too much, read papers and walked the dog (I did get a tick from the walk, but felt it crawling up my leg and nabbed it). We had the leftover chicken Piccata for dinner, then I drove over to Nissan Pavilion to see Rush (Jill is not a fan). Another great show from them, highlights were my first time seeing “Circumstances” from Hemispheres (my favorite album), the live debut of “Entre Nous” (from Permanent Waves) and all of the new songs were good, particularly “Spindrift” and “The Main Monkey Business”. Some other fan reviews here. I got a shirt, a program and a beer (Yuengling was $8).

Sunday was also kind of lazy, finished the papers, watched some TV, and surfed before we headed over to the Loudoun Summer Music Fest to see Blues Traveler. This is the third year they’ve been having live music on Sundays, and good bands. I’d been meaning to get over there, but schedule conflicts and weather had stopped me. But the rain held off to a couple light sprinkles, and we had a good time hanging out with the Jewells. Along with the usual hits, it was nice to hear “Canadian Rose” and “100 Years”. We enjoyed food from the Saffron Cafe (Mediterranean), Buffalo Wing Factory and Kirkpatrick’s, and beer (Blue Moon was $5).

Maybe not often, but this is certainly worthy.

Last night we went to Wolf Trap for the first of only two shows there this summer. We’d actually planned on just one, the Pat McGee Band/Carbon Leaf show July 6th, but I bought the VIP package, so that meant we couldn’t take advantage of the one of the perks of my Wolf Trap membership, two passes to the Encore Circle. So I just sent in my preferred list of three shows, putting at the the top Jill’s pick: Lyle Lovett & k.d. lang. She had no idea when I ordered tickets in March what her schedule would be like – it was only when the passes arrived two weeks ago that she knew her midterms would be over yesterday so she could go. I found someone in Reston offering sweet box seats slightly less than face on Craigslist, so I snagged those.

I know there are those who would argue with me about Lyle Lovett & k.d. lang being alt-country, but see – even Wikipedia agrees with me. And I think they do fit the definition – their sound is rooted in country, but neither has a traditional twang. I’d seen them both before briefly, so this was my first time seeing their full sets (Jill had seen Lyle before with her mom). Although last night’s show wandered all over the place: we heard some swing, jazz, rock and blues at various points.

We got to Wolf Trap with plenty of time to enjoy the spread at the Encore Circle. I wasn’t a big fan of the tofu on a stick, but the Thai peanut chili sauce they served with it was awesome – I didn’t think there was anything out there to make me eat tofu. We headed in to see k.d. lang right on time. We were both really impressed – she really has an amazing voice. She did a number of good covers, most notably Jane Siberry’s “The Valley” and an amazing one of Leonard Cohen’s “Hallelujah” (best known by the Jeff Buckley version). Her own “Constant Craving” got the biggest response of the night, but she got lots of applause throughout her set, and was brought back by a standing o.

We headed back to the lounge for a bit before coming back to catch Lyle Lovett. He started off strong with the big band, but slowed down soon, not very good when your wife is very short of sleep and still has to get up early the next day, so we left about halfway through his set. Not too important, Jill was much more taken with k.d. lang.

One of the intriguing things about the upcoming Live Earth concerts is they have concerts planned on all 7 continents. Of course the US and UK shows are vying for supremacy, and the rest of the world is ok, but I was curious about what they could do on Antarctica. I wonder no more:

OK, so they’re not rock stars. But scientists with the British
Antarctic Survey will guarantee Al Gore’s promise that the Live
Earth concerts on July 7 will be performed on all 7 continents.
They’ll be performing during the dead of winter at the Rothera
Research Station. In fact, it’ll be the first time anyone outside
the station has heard the indie rock-folk band, Nunatak, play at
all.
(Nunatak, by the way, is a Greenlandic word that means an exposed
summit of a ridge mountain or peak within an ice field or glacier.)
The band’s live audience won’t be very big, either. Just the 17
colleagues who are manning the station during the harsh Southern
Hemisphere winter….

“How should I cook chicken breasts?”, I asked Dave, my coworker (well, first I asked him for a regular expression book, but he didn’t have one). After learning I didn’t have time to marinate and I was out of propane for the grill, he didn’t hesitate. “Chicken Piccata”, he said, and gave me a quick lesson. I didn’t trust my memory, so I found this recipe, and stopped at Safeway for capers on the way home. It took a bit longer than predicted, but it was tasty. Funny but I’d never heard of it before today, but Jill recognized it right away when I set it down in front of her (with some sauteed squash). Points to Dave.